I’ve always said there’s a slot machine theme out there to meet the taste of absolutely anyone. That may not have been true back in the days before internet casinos came along, but two decades later, it’s an undeniable fact. You can play ritzy slots, oriental slots, scary slots, holiday slots and yes, even nerdy slots.

Today we’ll take a look at 5 of the nerdiest slots of all time, specifically designed to meet the needs of all you tech geeks and sci-fi fantasy lovers out there.

While the majority of this list is devoted to online slot machines, our first pick could only be found on live casino floors, right up until a few years ago… 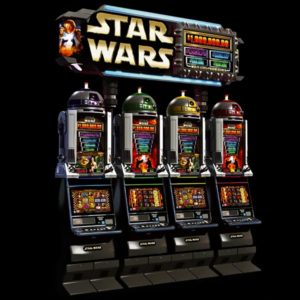 The Stars Wars slots were some of the most popular in Vegas and beyond for years. Featuring the epic cinematic series’ most beloved characters – Luke, Han, Princess Leia, Chewbacca, Obi Wan Kenobi, R2D2, C3PO and many more – Star Wars fans from all over the globe enjoyed these games.

That came to a crashing halt after Disney acquired Lucasfilms for $4 billion in 2012. The family-friendly organization announced the following year that it would not renew licences for any Star Wars themed gambling games. The same was decided for its Marvel brand. Thus Marvel and Star Wars slots, as well as Marvel themed lottery tickets, began to disappear as their licences expired.

Although it’s become a thing of the past, the Star Wars slots by International Game Technology (IGT) was by far one of the best nerdy slots of all time. 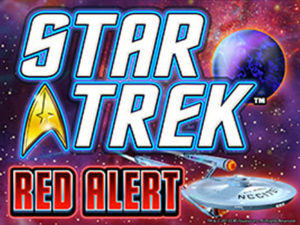 Back in 2007, WMS Gaming released the first in a long series of Star Trek slots, Star Trek: Red Alert. As is often the case, the original was much better than the sequels (at least in my opinion).

Star Trek: Red Alert is based on the original television series, starring Captain Kirk and the crew of the Enterprise, including Spock and Dr. McCoy. Other symbols include their iconic, color-coded badges and lots of the classic, hand-held tech gear they used aboard the ship.

While it’s not a progressive slot machine, per say, it does have a progressive story line that nerds will really love. The more you play, the further through space you’ll travel, unlocking access to new worlds and greater adventures.

Lord of the Rings Slots 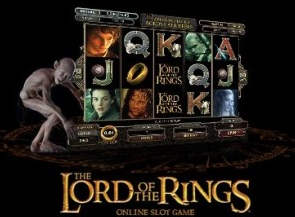 I’m a huge Lord of the Rings fan, and I know a lot of you are too. IGT‘s Lord of the Rings (LOTR) is one of the best nerdy slots around, based on Tolkien’s first in the series, Fellowship of the Rings. The graphics are outstanding, incorporating actual footage and sound effects from the film, as well as all of the beloved characters.

Join Frodo on his quest to protect the ring as he and his companions travel Middle Earth, taking advantage of wilds, free spins and lots of other lucrative features along the way. 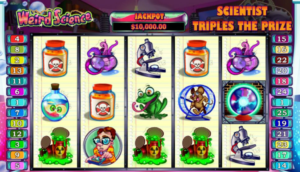 If mixing colorful concoctions in the lab brings you more joy than a visit from Santa on Christmas, Weird Science is the slots for you. The team at Habanero put this one together, and while there’s nothing exceptional about the graphics – no cool 3D animations or chemical explosions, it’s clearly aimed at all you science nerds out there.

The symbols include mad scientists, beakers, microscopes, toxic sludge, vibrant vials of mysterious liquids and more. With 5 reels, 25 paylines, wilds, scatters and free spins, this is one nerdy slots you’ll want to give a whirl.

Beauty and the Nerd Slots 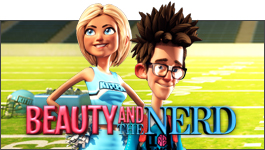 The name alone should give away the nerdy slots theme here. Developed by Sheriff Gaming, these reels will take you back in time to high school, when gorgeous cheerleaders were the nightly wet dream of every geek in the halls.

Stan plays the role of a typical high school outcast, donning a collared, button down shirt, suspenders and thick-frame glasses, protected by the classic band-aid over the nose-piece. In the other corner, we have Kelly, the bodacious blonde cheerleader who never knew Stan was alive.

But this nerd is determined to get her attention, playing the scrawny hero who takes to the science lab to create a love potion that will harvest the requited emotions of his one true love.