Here’s a good question for all you poker machine lovers out there. Where can you find the luckiest pokies in Australia? The owners of the Beachmere Hotel in Queensland, about 50km up the coast from Brisbane, believe their lucky pokies and keno games are the best in the land – Queensland, that is.

What would lead them to boast such an admirable title? Last moth, the hotel paid out a staggering $2.09 million keno jackpot when one of their fortuitous patrons hit a 10-number winner on November 18. This is actually the second time in the last four years the Beachmere property has paid a 10-number jackpot in excess of $2 million. But that’s not all.

On the very same day, one very lucky pokies players struck an $11,000 jackpot at the Queensland hotel. It was the eighth time in the last 12 months alone that the beachfront property paid a poker machine jackpot of $10,000 or more.

Add to that a substantial number of other high keno jackpots that have been paid out in the last 12 months, including a 9-number win worth $155,616, and the Beachmere Hotel would certainly seem to be the luckiest pokies and keno destination around.

How Lucky Is Beachmere Hotel?

The odds of winning the big multi-million, 10-number keno jackpot are staggeringly high. The government of Queensland says it’s a 1 in 7,000,000 chance.

The hotel’s director, Robert Cromskey, firmly believes his establishment is the best place for punters to play, and told the media the Beachmere Hotel had earned the title, “Luckiest Pokies in Queensland”.

“We are big advocates of gambling responsibly,” he said. “But with odds like this, if you were feeling lucky it would make a lot of sense to try out your luck.”

Are His Lucky Pokies Really Ranked #1? 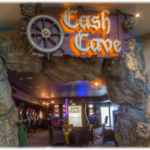 All of those big wins coming in such a relatively short amount of time is no doubt impressive, but does the popular hotel really deserve that esteemed title? According to the Queensland Office of Liquor and Gaming Regulation, maybe not.

The latest list of lucky pokies operators who paid out the highest amount of winnings has Gold Coast leading the pack by leaps and bounds with $28,816,132.34. Then again, Gold Coast is a full scale casino with 5,991 pokies gracing its floors.

If we look instead at the amount of winnings paid per poker machine, Gold Coast’s lucky pokies aren’t quite so lucky after all, dropping into fourth place with $4,809.90.

But the Moreton North region, where Beachmere Hotel is located, doesn’t come in first on that list either. Top billing in this category goes to the Logan-Beaudesert region, which paid out $6,036.58 per machine. Next is Brisbane South with $5,707.15, pushing Moreton North back into the third position at $4,972.36.

However, it should be noted that the latest results from the QOLGR were compiled for the month of October 2016. Odds are, once the November results are published later this month, Mr. Cromskey and his Beachmere Hotel in Moreton North will claim the title of Luckiest Pokies in Queensland, after all.