New Australian pokies, or slot machines, are being introduced by interactive casino games designers all the time. The industry’s biggest developers are known to put out some of the most graphically rich, entertaining reel spinners on a regular basis. Today, we’ll take a closer look at the best new Australian slots titles for 2017.

Having personally tested out more than three dozen of the latest releases, I’ve come up with four of the best new Australian pokies titles that I think you’ll love. To ensure a wide variety for my readers, I’ve selected the top slots releases from leading developers Microgaming, NetEnt, NextGen and Yggdrasil.

Microgaming just introduced four new slots titles, including Shanghai Beauty, Huangdi: The Yellow Emperor, Tarzan and Dragonz. The first two conform with the brand’s typical, cookie-cutter designs with completely exhausted themes. Tarzan is pretty cool, but I was completely blown away by Dragonz.

This new game is beyond anything Microgaming has released in the past. It’s themed around four incredibly adorable dragons with aspirations of ferocity; each possessing a unique elemental attribute. They include the red fire-breathing Flint, purple lightning-bolt-wielding Switch, blue ice-flinging Frost, and green poison-spewing Gobble.

The graphics are absolutely stunning, but it’s the way free spins are awarded that really draws players in. Each of the Dragonz has it’s own free spins feature. The first 12 twelve times free spins are triggered, the game will activate a specific dragon’s feature. After that, Player’s Choice is unlocked, so players can choose whichever type of free spins they want.

Flint has Flaming Wilds, Switch has Stashed Wilds, Frost has Frosty Wilds and Gobble has Winning Wilds. Which will be your favorite? You’ll have to play to find out.

NetEnt puts out new Australian slots titles only a few times a year, on average, but when they do, they’re often of superior quality and entertainment. That assessment most definitely applies to their latest release of Warlords: Crystals of Power.

As the name entails, this game is themed around a trio of ancient Chinese warlords, and the crystals that each possess, giving them the power to rule over their dynasties. It is brimming with special features, including scatters, free spins, stacked symbols, re-spins and three random wild features.

The Random Overlay Wilds only occur in free spins mode, and include the Barbarian Hammer feature, which places four wilds onto the reels in a square, the Priestess Arrow feature, where 2-5 wilds can appear on the 1st and 5th reels, and the Samurai Sword feature, which puts 2-5 wilds on reels 1 and 4.

There are also three Scatter symbols in the game, one representing each Warlord. If two or more different Scatters appear during a single spin, the Warlords go to battle, and the winner’s Scatter symbol replaces the loser’s. The reels will then Re-Spin. If anther Scatter appears, another battle takes place, and another Re-Spin.

Once three or more Scatters of the same type land on the reels, free spins will be activated for that type of Scatter. Blue grants 9 free spins, green 7, and red 5. The color will also effect how the free spins play out, and what symbols appear on the reels during the free spins.

The latest release from Next Generation (i.e. NextGen) is Blood Lore Vampire Clan. I don’t believe this game will attract as much attention as Microgaming’s Immortal Romance, but knowing how many fans of the Twilight saga there are, I’d bet anyone who enjoys vampiric/lycanthropic themes will find their interest piqued. 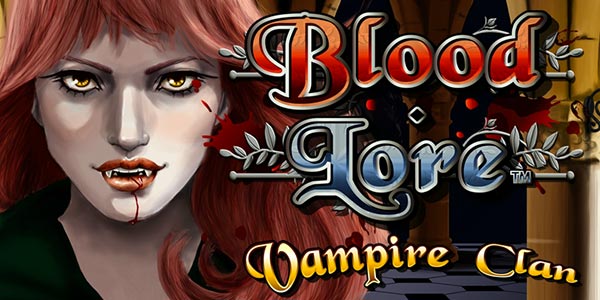 While it lacks the 3D graphic appeal of the above Dragonz and Warlords, it’s got some great features to add to its popular motif. The Vampire Queen is the Wild, and doubles the prize for all winning combinations she contributes to in the base game.

The Full Moon scatter awards 4 free spins for each Scatter on the reels, so long as three or more are present in a single spin, with 3x multipliers on all wins. If a Vampire Queen Wild is involved in any winning combination during free spins, the prize is multiplied 6x. Free games can also be retriggered during free spins.

While it does seem rather simplistic, the low variance is a big plus. It took me about 200 spins at $0.60 each to trigger 12 free spins, but once I did, it was game on. The $20 I’d lost getting there was well worth it. I had already made a small profit from the first round of free spins before re-triggering 12 more, and by the time I was done, I collected my $29.04 profit and walked away happy.

Another epic 3D glorification was released by Yggdrasil, just in time to make the list of best new Australia slots titles for 2017. It’s called Vikings Go Berzerk, and it’s a 5×4 reel with 25 paylines that features four Vikings characters, four respective coin symbols, plus wilds, scatters and a pair of treasure chests.

The two Treasure Chests, normal and Gold, are the most unique features in Vikings Go Berzerk. They can only appear on the 4th and 5th reel respectively. The standard chest launches a Pick Me Bonus with small prizes in the base game, or larger prizes during free spins. The Golden chest has even better prizes in the base game and during free spins, awarding up to 10,000 coins.