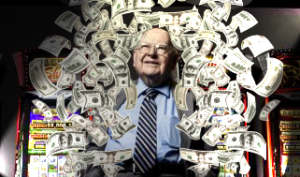 I’m sure we’d all like a little incite into how to win on pokies. None would know better than Len Ainsworth, the founder of two of Australia’s most successfully poker machine manufacturers, Aristocrat Leisure and Ainsworth Game Technology.

Even at 93 years of age, he’s still schooling the younger generation of investors on how to win at pokies – and perhaps more importantly, when pull out in time. Technically speaking, Mr. Ainsworth won $200 million this week off the one-armed bandits when stocks plunged as much as 20% on Wednesday.

How is that a good thing, you ask? Well, it’s not a good thing overall, but it’s surely got Len smiling these days. Early this year, his fellow investors agreed to the sale of Ainsworth’s 53% stake in the company to fellow pokies maker, Novomatic.

At that time, based on current market value, he was promised $2.75 per share. With 172.1 million shares in his possession, that equates to about $473 million.

Following yesterday’s plunge, which saw AGI stock fall to as low as $1.60, his shares would be worth $200 million less than what he’s making off them.

Why The Sudden Drop In AGI?

The plummeting value of Ainsworth Game Technology (ASX: AGI) was attributed to the company’s latest board announcement, which revealed that first-half earnings will be coming up rather short. Apparently, sales have been well below average, blamed mostly on the softening of sales across Australia’s local markets.

Aristocrat also pointed the finger at an execrably lower rate of poker machine sales in Australia, calling it a reflection of “the competitive nature of the domestic market”.

Mr. Ainsworth doesn’t just know how to win at pokies – he knows how to spread the wealth, too. He’s actually earmarked the majority of his $473 million as charitable donations, which will make for a nice tax write-off come next October.

He may want to consider treating his dear wife Gretel to some extravagant pleasantries, as well. Her 8.9% shares in AGI were not part of the Novomatic deal, thus plunged in value by about $35 million yesterday.

A Guaranteed Waiting Game for Ainsworth

The pokies magnate – who founded Aristocrat Leisure in 1953, then stepped away from that company to for Ainsworth Game Technology in 1995 – hasn’t collected on the sale yet. That won’t happen until Australia’s gaming regulators stamp their official seal of approval on the deal to hand over dominate ownership of the pokies maker to Novomatic.

But Len has nothing to worry about. Despite the enormous shift in stock value, the paperwork was already been signed by all parties back in June. Whether the stock rises to $5+, or plummets further to mere change, he will receive the $2.75 per share that was previously agreed upon.

The situation may look bleak at the moment, but AGI has assured its investors the ticker will rise once more, and sooner than later. The company believes the involvement of Novomatic will be a near-term boon for sales.

“The anticipated synergy benefits arising from the strategic relationship with Novomatic are expected to be realised in the second half financial year 2017,” said AGI.

The company also noted that further updates should be available “at the time of the half-year results in February 2017.” We’ll find out then if AGI still knows how to tin at pokies without dear old Len Ainsworth at the helm.