Taking advantage of the Garden State’s ‘New Jersey First‘ initiative, slots manufacturer GameCo, Inc. brought its newly developed products to the DGE for inspection. As per the initiative, if approved, GameCo was promised expedited deployment of its skill-based slots at Atlantic City Casinos.

State regulators weren’t kidding either. Now that GameCo’s new machines have been approved, they could start rolling out on casino gaming floors within just a few days, as early as Monday, October 17.

The casinos destined to offer these games first are all of the city’s Caesars Entertainment owned properties, including Bally’s Caesars and Harrah’s.

GameCo’s skill-based slots – what they call Video Game Gambling Machines, or VGMs – are unlike any slot machines the US has ever known. They are more akin to arcade machines than slots, and actually feature video game controllers, much like Playstation and XBox, instead of traditional buttons. 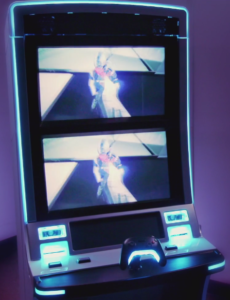 The games will undergo a few weeks of testing following their installation, and are expected to bring younger gamblers – specifically millennials, aged 21-34, who grew up on fast-paced, action-packed PC and console video games – back to the casino gaming floors.

The first VGM to be installed is called “Danger Arena”. The game offers a brief tutorial wherein players learn the controls and objective, after which they are presented with a random map and/or game scenario. This ensures unpredictability and the element of chance required by regulators to qualify as a game of chance.

Players then have 45 to 90 seconds (depending on the map) to navigate the scenario. Payouts are determined by the player’s speed, efficiency and overall performance.

In addition, the video game gambling machines all offer a random chance to win a secondary prize of anywhere fro $1 to $5000. In this way, if players don’t exhibit enough skill for the machines to meet the state’s minimum payout percentages, the game will award more frequent or higher random prizes. It also gives less skilled players a better chance at winning a prize. 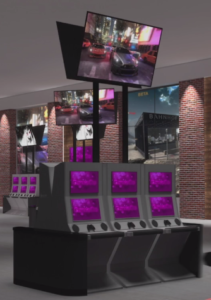 GameCo, Inc. has been in a ferocious battle with rival slots developer Gamblit Gaming to be the first to bring skill-based slots to market in the US. Both demoed their VGMs at the 2016 Global Gaming Expo. However, Gamblit is looking to install its games throughout casinos in California and Nevada, thus chose not to take part in the New Jersey First initiative, whereas GameCo saw the Garden State as a huge opportunity to beat Gamblit to the punch.

“With this approval from the DGE, the VGM is officially the first skill-based video game gambling product approved by any U.S. gaming jurisdiction regulator,” confirmed GameCo’s founder and CEO, Blaine Graboyes.

The company plans to deploy a total of 21 VGMs, in triple-unit carousels, at Atlantic City casinos. Three triple-units will be installed at Caesars, plus two at Bally’s and two at Harrah’s.

DGE Director David Rebuck made the enthusiastic announcement yesterday evening. “We have been at the forefront of encouraging innovation, and are pleased that the efforts of GameCo and division staff have culminated in this skill-based video game becoming available in Atlantic City before any other jurisdiction in the United States.”