If someone were to ask you where to find the world’s biggest casino gaming floor, what would you say? Probably Las Vegas, Nevada, or maybe Macau, China? As it turns out, Las Vegas doesn’t even make it into the top 10 list of largest casino floors, and while half of them are situated in Macau, you might be shocked to find out the biggest of them all is actually in Wisconsin, USA.

We’ll take a brief look at the largest casinos in the world by gaming floor space, along with their locations and any other special features you should be aware of.

Towering 261 meters (856 feet) into the Macau skyline is Casino Grand Lisboa. Not only is it the tallest casino in the region, it has the 10th largest casino gaming floor in the world, at 412,710 sq-ft. It’s also the world’s largest LED dome, with 1 million lights on its exterior. Opened in December 2008, the Grand Lisboa was the first Macau casino to host Craps and Texas Hold’em among its 800 table games.

Nine years in the making, Galaxy Macau finally opened in 2011, featuring 420,000 sq-ft of gaming space on the Cotai Strip, making it the 9th biggest casino in the world. One of its most astounding features is the Fortune Diamond, an elaborate fountain located in the lobby that transforms into a roulette wheel with a brilliant diamond emerging from its center.

Jackpot Junction opened in 1984 as nothing more than a large bingo hall. Four years later, slot machines and table games were installed, and through numerous expansions, it now boasts the world’s 8th largest casino gaming floor, at 440,000 sq-ft. There are more than 1,000 seats allocated to bingo alone!

Another gargantuan member of Macau’s Cotai Strip, City of Dreams opened in 2009, and has an immense gaming floor that rounds out at 448,000 sq-ft. This impressive architectural giant is loaded with attractions, including the world’s largest water show in its “Dancing Water Theatre”.

This tribal-owned and operated gambling venue has been around for three decades now, and it’s 480,000 sq-ft of casino gaming space is known to attract a minimum of 2 million guests every year. Not only can visitors play an unending array of slot machines, table games and bingo live in person, they can also access the same games online, for real money, so long as they are physically located anywhere on the San Manuel reservation. 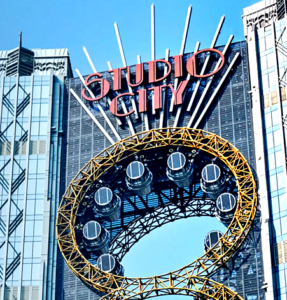 Yes, another Macau casino graces the list. Coming in as the 5th biggest casino in the world at exactly 500,000 sq-ft of gaming space, Macau Studio City was just opened in October 2015.

If you’re the adventurous type, don’t miss an opportunity to ride ‘The Golden Reel‘, a figure-8 Ferris Wheel embedded right into the tower that soars 426 feet into the air, delivering a breath-taking aerial view of city.

The largest casino in Canada, Casino de Montréal was built on Notre Dame Island, opening its doors to the public in 1993. The 526,488 sq-ft gaming floor is exceptional in many ways, but none so famous as the great Keno scandal of April, 1994.

A man was able to predict 19 of 20 winning keno numbers on three consecutive games, winning about CAD $600,000. An investigation revealed the keno game’s RNG system was antiquated and very easy to predict by anyone paying enough attention, thus he received his winnings, and the casino updated its RNG software.

The final Macau casino on the list, and the third largest casino of them all, is the Broadway Macau, located on the Cotai Strip. The second phase opened last May, bringing the total gaming floor area to a whopping 615,328 sq-ft. The Broadway Macau is rumored to have the best authentic Macanese food in the region.

Yes, it’s true – the world’s second largest casino is located in a little bitty southern United States town called Thackerville. But don’t let the location fool you. This mega-casino attracts millions of gamblers every year to it’s 630,800 sq-ft gaming floor, teeming with thousands of slot machines, about 100 table games and a 46-table poker room, not to mention a massive bingo hall.

Interesting fact – this second place slot once belonged to Foxwoods Casino Resort in Connecticut, but with Macau’s Cotai Strip growing and the global market expanding, that casino no longer even makes the top 10. 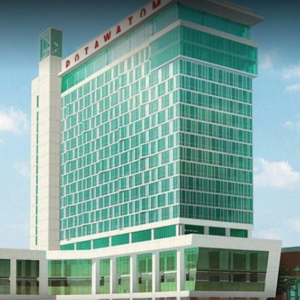 It’s the world’s biggest casino gaming floor, and chances are, you aren’t even sure how to say it. The Potawatomi (Poe-tuh-WAH-Tuh-Me) Hotel & Casino is, of course, another tribal-owned gambling destination, and while the box-ish design outside isn’t very impressive (compared to today’s modern architectural wonders), it’s what’s on the inside that counts.

The 780,000 square-foot casino – that’s almost 18 acres, for anyone who’s counting, comparable to more than 4 average-sized city blocks (and that’s just the casino gaming floor, remember) – is famous for its charitable donations, and is #14 on Milwaukee’s list of top 25 employers.