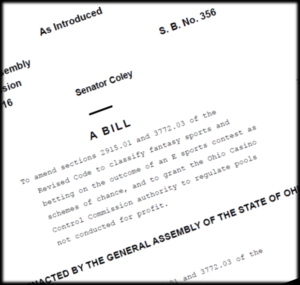 The NFL Football season is in full swing now, and with it, active participation in daily fantasy sports – in areas where it’s legal, that is. In Ohio, there are no current laws regulating the activity, or prohibiting residents from participating in DFS betting, but that could soon change. And if the state enacts these new fantasy sports laws, operators like DraftKings and FanDuel won’t be too keen on the restrictions.

The bill in question, SB 356, was introduced on Monday by Ohio Senator Bill Coley. It aims to categorize daily and season-long fantasy sports as a “scheme of chance”, which would put it right alongside other definitive gambling activities, like playing slot machines or tossing chips at the blackjack tables.

Being a gambling activity, DFS betting would fall under the regulatory authority of the Ohio Casino Control Commission, which would be responsible for scripting specific rules and enforcing them.

Nothing In It for DFS Betting Sites

Where the bill will surely lose the backing of today’s DFS operators, however, is its stipulation that 100% of all entry fees must be returned to the players who win the contests. That would mean DraftKings, FanDuel, and other operators would not be able to pocket a portion of each prize pool.

“Some of those sites also take a 10, or 15, or 20 percent rake off the top.” said Sen. Coley. But as he explained, that’s “totally illegal under existing Ohio law and will not be tolerated.”

During a news conference on Monday, Sen. Coley compared DFS betting to participating in a sports pool at the local bar. If the owner charges $10 per entry and requires 10 entrants, but only offers a $90 pool, “it is clearly conducting a pool for profit and in violation of Ohio Law,.”

Bar and office pools “are not illegal so long as 100% of the entry fees are distributed as prizes to those who entered,” he explained. And for that reason, he feels fantasy sports laws should be enacted to stop DFS operators from skimming a slice of the pie.

Controversy over the bill arose almost immediately, with State Representative John Boccieri [D-Poland] arguing that DFS betting shouldn’t be defined as gambling. Due to the level of skill involved, Rep. Boccieri says there’s no need for any government regulation or fantasy sports laws to be enacted in Ohio.

“I don’t believe fantasy teams should be considered gambling activities equivalent to slot machines and the like,” Rep. Boccieri told WFMJ News. “To my knowledge, no one has ever squandered their life savings playing fantasy football.”

The Democratic State Representative said slots-style gambling and fantasy sports betting are too different to be classified in the same category. Too many pulls of the slots lever can certainly lead to financial distress, but he believes a casual, infrequent online sports game among friends poses no such threat.

Boccieri went on to oppose the “considerable authority” the Ohio Casino Control Commission would have over the daily fantasy sports industry, if Sen. Coley’s SB 365 were to become law.