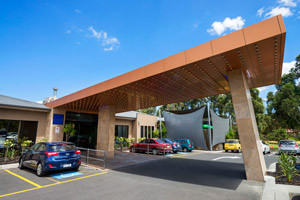 I think we can unanimously agree that children and poker machines don’t mix. But the Victorian Civil and Administrative Tribunal (VCAT) were all in favor of giving Beretta’s Langwarrin Hotel 10 new pokies, in exchange for the owner spending $700,000 to upgrade its outdoor facilities with a vast covered playground.

Last year, Langwarrin Hotel’s request to install 10 more poker machines, on top of the 52 that already existed at the pub, was met with considerable coverage from local and national media. When hotel manager Peter Beretta submitted his application to the Victorian Commission for Gambling and Liquor Regulation (VCGLR), it included an ultimatum that left officials biting their lips over whether to approve the extended licence.

Beretta had previously promised to upgrade the outdoor play area with a covered roof, vowing to spend nearly three quarters of a million dollars on the project. However, “if approval for these additional gaming machines is not obtained,” he told VCGLR, those plans would be scaled back considerably, and would exclude a weatherproof roof for the playground.

The Frankston Council was unwilling to provide the necessary permit that would allow the Langwarrin Hotel to install the new pokies, by after much debate, VCAT overruled that decision, ordering that the planning permit be granted to Mr. Beretta.

In the end, being forced to weigh the benefits of a year-round, weatherproof playground for the community, against the potential harms of raising the number of the pub’s poker machines from 52 to 62, the VCGLR acquiesced to Beretta’s postulations. The Commission decided the playground would be “a social benefit” to the community.

It didn’t hurt either that Beretta agreed to contribute an additional $10k annually (on top of his current $80k annual community contribution) to the charitable organization, Theodora House.

Last month, Philip Martin and Tracy Watson of VCAT exuded similar sentiments, feeling the application was worthy of approval due to the community benefits that would arise from a vast family park outside the hotel. Reports from gambling researchers that were disconcerted by the linking of poker machines with child’s play were effectively disregarded.

“While not a determinative factor in itself, we accept it is a positive aspect of the proposal in terms of ‘net community benefit’ that the proposal includes $700,000 of works to enclose the updated children’s playground,” ruled VCAT in August.

“This will enable the playground to operate on a year-round indoor basis,” said VCAT. “We were told this playground already is and will remain properly managed and the operator will ensure the relevant parents do not ‘disappear to the gaming room’.”

In conclusion, VCAT ruled that, “Within these appropriate parameters, we expect there will be many parents living in Langwarrin with young children where this year-round indoor aspect of the intended upgraded playground will provide some valued ‘time-out’.”

In the same token, the panel felt that Beretta was worthy of the new pokies, based on the high volume of gambling activity at the hotel pub. “Certainly there was a relatively high level of usage of the existing EGMs when we inspected the subject gaming room,” said VCAT, deciding that increasing the number of poker machines would help to “ease this pressure”.

The Langwarrin Hotel saw punters lose $7.7 million to its poker machines in FY 2015-16. According to estimates from VCGLR, annual expenditure is projected to rise $465,879 once the new pokies are installed.