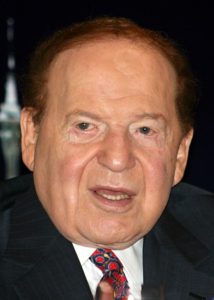 Who is Sheldon Adelson? If you’re asking yourself this question, you must have little or no interest in online poker, or gambling over the internet in general. Adelson is the billionaire casino tycoon that owns Las Vegas Sands Corp, and the man behind a several-year long campaign to get online gambling blanket-banned across the United States.

Adelson has – once again – taken to the media to babble on about his distinct aversion to any form of gambling over the internet. Last week, in an interview with Yahoo! Finance, Sheldon aimed his rusty arrows at Daily Fantasy Sports (DFS) and online poker, claiming that neither is remotely close to being a game of skill.

That didn’t sit too well with today’s most successful live and online poker players. So one of them actually decided to call the billionaire out on it.

Brian Rast, who is counted among today’s top professionals in the poker world, presented Mr. Adelson with a challenge. He offered the CEO a chance to back up his opinion; to prove his claims that there’s no skill involved in poker, by challenging him to a $2 million heads up poker match.

No Skill Involved in Online Poker

While the majority of Adelson’s interview dealt with his dribbling opposition to DFS regulation, his comments on poker were very similar. He told Daniel Roberts of Yahoo! Finance:

On Friday, the same day that interview was published, Brian Rast fired back at the Las Vegas casino magnate, asking Adelson to prove his argument in a $2 million heads up poker challenge. After all, if poker is purely a game of luck, then there’s no reason why Mr. Adelson shouldn’t have a 50/50 chance to win against the likes of Rast – despite the fact that he is, apparently, one of the luckiest poker pros on the planet.

Rast has spent his fair share of time playing poker over the internet, where he racked up over $700k in tournament wins and no telling how much more in high stakes cash games before the ominous Black Friday of Online Poker (April 2011). Since then, the majority of his action now takes place on the live felt, where the highlights of his career include 3 WSOP bracelets, a WPT title and over $17.7 million in live tournament cashes.

If those stats prove anything, it’s that a pro poker player’s skill – yes, skill – eclipses both the live realm and the virtual felt; one factor that surely lead him to oppose Adelson’s sophomoric claims.

Hey Sheldon Adelson, waz up? Poker is a skill game. Don't believe me? You're a billionaire, I'm not close. Let's play HU 4 2 million each.

The elite poker pro followed that up with some hard evidence to support his case – the same evidence that’s been touted by other poker pros, professors, computer wizards and other experts – pretty much everyone who has a modicum of knowledge about the game.

“Computers can beat top humans in chess/gammon, but not poker,” Tweeted Rast, referring to numerous occasions when sophisticated poker bots failed to defeat professional poker players in multi-seat or heads up poker matches.

“Nobody disputes if chess is game of skill. Sheldon and others are ignorant,” Rast concluded.

Unfortunately, as much as we’d all love to see this heads up poker bout go down, it will never happen. Rast would jump on the chance to swipe $2 million from the ostensibly poker-illiterate CEO, but Adelson has absolutely no reason to respond to the summons.

While Brian Rast has something to prove, and is beyond confident that he will win – because, yes, as any decent player knows, poker is a game of skill – Adelson, has everything to lose. His argument against online gambling teeters on the faith of the gullible, venal, and righteous minded – those who are willing to accept his assertions that online gambling “exploits poor people”.

Somehow, he’s managed to convince his followers that online casinos are more dangerous than land-based casinos. Does he really believe that only wealthy people visit his casinos all over the world? And that poor people will only spend – and lose – the little money they have over the internet?

No. I think we all know better than to trust in the words that are spilling from his lips. The reality of the situation is staring us all in the face. Mr. Adelson can’t afford to let online poker, and casino games, and daily fantasy sports, become regulated on a federal level, because it could pose a threat to his multi-billion dollar brick-and-mortar casino business.

Thus Brian Rast and Sheldon Adelson will never sit across the felt from one anther, with a deck of cards and millions of dollars on the table.