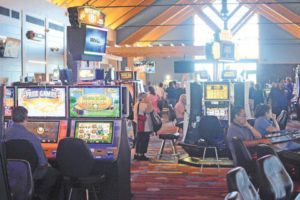 In 1991, the White Earth Band of Ojibwe opened the first Shooting Star Casino in Mahnomen, Minnesota. Now, 25 years later, the tribe held it’s grand opening of the second Shooting Star Casino, just outside of Bagley, MN. They’re not done yet, though, with plans already in the works for another new casino in Dent, MN next year.

Situated on Highway 27 in Clearwater County, between the city’s of Bagley and Ebro, the new 21,400 square foot property opened it’s doors at 10:00 a.m. this morning, welcoming countless guests to enjoy the facility’s 170+ slot machines and casual dining at the Little Dipper Bar and Grill.

Shooting Star Casinos’ General Manager, Bill Marsh, extolled the rapid development of the new casino, and while the facility is much smaller than it’s decades-old sister site in Mahnomen, he promised there is plenty of room for expansion, should the community call for it.

“We have had a lot of ideas for expanding it, but nothing is set in stone,” said Marsh. He said the tribe’s desire to expand the facility with additional features, such as a hotel and event center, will “be based off the demand. If the demand is here, and our players ask for it, then we will answer the call.”

The idea of building a second Shooting Star Casino in Minnesota came about in 2014, followed by a study to see just how feasible the idea was in terms of profitability and benefits to the local community. That study, conducted in early 2015, revealed that the Bagley area, “had a great demographic and offered a good opportunity for market penetration,” said Marsh.

“We believe that there will be a substantial impact on Bagley and the surrounding areas, creating both new employment and bringing new dollars,” he said. So far, the new casino has seen 71 permanent jobs created, plus the hundreds of temporary jobs that were made available during construction.

While the groundwork for the gambling facility was being laid last year, Shooting Star Casinos announced plans to build a third gambling destination on Star Lake near Dent, Minnesota. Marsh elaborated on that project, confirming that construction has yet to begin, but it’s expected to be completed sometime in 2017.

“Our plan for that facility is to use the same design firm, so a lot of the architecture you see in Bagley will also be in Star Lake,” he said, adding that the third location will be developed “on a larger scale.”

That new casino on Star Lake will feature slot machines and a casual bar and grill for hungry guests, much like the Shooting Star Casino that opened today. However, the game variety and amenities will be more extensive, including a buffet, gift shop and table games. It will also cater more to travelers with a small hotel and RV Park.

Neither will mirror the immense stature of the 25-year old Shooting Star Casino in Mahnomen, but that could change over time. The original property was much smaller when it opened as a temporary facility in 1991, followed by a larger grand opening in 1992. In 2012, a massive $30 million expansion project increased the facility to 145,300 square feet, including a 386-room hotel, concert venue and meeting space.