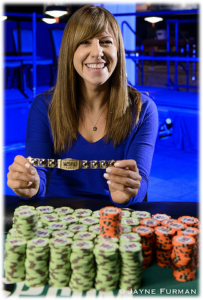 For an entire year (and 2 days), men dominated the 2016 World Series of Poker, which is nothing out of the ordinary. In the last 6 days, however, the ladies have made their fearsome presence well known as veteran poker pro Kristen Bicknell and first-time WSOP’er Safiya Umerova each claimed gold.

Canadian poker pro Kristen Bicknell has spent the last 10 years grinding the felt, and it’s pretty clear that her skills have developed on an exponential basis. She snagged her first bracelet – and her first 6-figure cash – at the 2013 WSOP Ladies NLHE Championship, worth $173,922.

Last week, Kristen joined a field of 2,158 in the 2016 WSOP Event #46, NLHE Bounty, where she head-hunted her way to a 1st place prize of $290,768, and her second career bracelet, on June 29. Bicknell’s win marked the first WSOP victory by a female player since Carol Fuchs took down the Dealer’s Choice event on June 27, 2015 – exactly one year and two days prior.

“The timing was really good for the cards that I got and I ran really well,” 29 year old Bicknell told WOSP staffers following the win. “When they had good hands, I had better hands and when I bluffed, I guess they didn’t have very good hands and folded.” 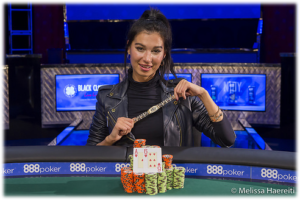 With less than two years experience competing in live tournaments, this may not have been Safiya Umerova’s first rodeo, but it was her debut appearance at the prestigious World Series of Poker. The 28 year old California girl, originally born in Russian, had no trouble routing a field of 1,050 in Event #50, $1,500 NLHE Shootout, scooping her first WSOP gold and by-far her largest live cash to date, $264,046.

The aspiring poker pro who immigrated to the USA in 2010, found herself behind in the chip counts going into heads-up against British poker pro Niall Farrell, who led at that point by about 4 to 3. However, a few quick double-ups – which she made look incredibly easy – and Safiya was over the top, and well on her way to victory.

“When the day began, I was just trying to make the final table.,” said Umerova after the inspirational triumph. “It’s just surreal to win. I’ve only been playing poker for a very short time.  It’s exciting.  This is a great start for my career.”

The gold bracelet win was Umerova’s second cash at the 2016 WSOP. Her first, coincidentally, came in Event #46 – the same event Kristen Bicknell went on to win. Safiya finished 189th in that NLHE Bounty, landing just inside the bubble for $1,748.

Safiya Umerova isn’t just playing the game she loves, and reveling in her burgeoning success. “I dream big,” she told WSOP, and she wasn’t kidding.

“I want to be the best poker player in the world,” she exclaimed. “I know I am not there yet. But I want to have the most gold bracelets anyone has ever had. That’s the goal. That’s what you are supposed to go for – right?”