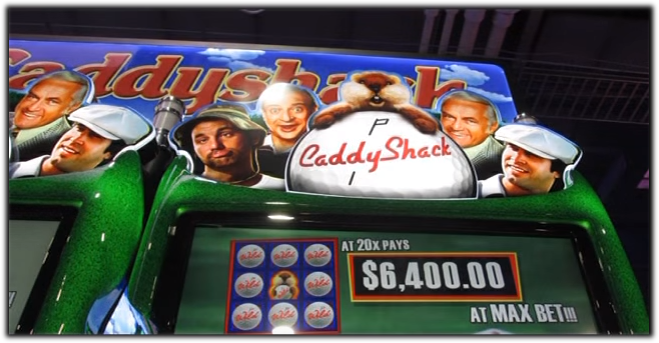 One of the most famous comedy films of all time has been turned into a slot machine. WMS Gaming and Bally Tech, under the parental wing of Scientific Games, have launched the Caddyshack Slot, heavily infused with the 1980 Hollywood classic film’s comedic gold, and a slew of cinematic bonuses to keep players munificently entertained.

WMS and Bally Tech debuted a demo of the new Caddyshack Slot at the 2015 G2E Global Gaming Expo. It was a huge hit, and the game’s impending casino launch has been highly anticipated ever since.

We’ll take a closer look at the myriad bonus rounds that can be triggered, each deeply infused with original scenes and unforgettable quotes from the film. 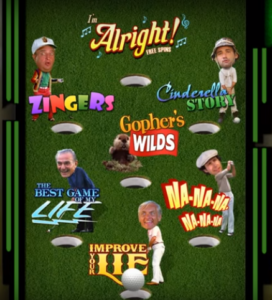 This game is all about the bonuses, and there’s 7 different Character Bonuses that can be triggered. Any regular symbol with a Golf Club on it is a bonus symbol, and if any three appear on a payline, you’ll chip the golf ball into one of the bonus game holes. A bonus round is also triggered each time you collect 3 Golf Club symbols.

“I’m Alright!” Free Spins: This bonus gives you 8 free spins to start. 8 more spins can be retriggered with 3 more bonus symbols, and if you happen to land 4 bonus symbols on the screen, you’ll also collect a Golf Club.

Zingers Bonus: Hosted by – who else? – Rodney Dangerfield, this pick me bonus awards credits.

Cinderella Story Bonus: Bill Murray takes center stage to run through a series of free spins until you win. That’s right, you keep on spinning until you hit a winning combination. Then, in picturesque Carl Spackler fashion, you’ll whack away at the flowers to reveal a 2x, 3x or 20x multiplier on the winnings.

Gopher’s Wilds: This unique bonus round sees those lovable gophers digging their way under the reels, dragging Flagsticks along with them. 9 gophers take the trek, and all who stop on a reel will turn it wild, while the rest escape. It’s possible to land all 9 reels with wilds, worth up to 6,400 with a max bet.

“The Best Game of My Life” Bonus: One of the most iconic scenes in the movie occurs when the Bishop teed-up the best game of his life during a rain storm, ending in disaster when he misses a put, curses God, and gets struck by lightning. This free spin bonus mimics that scene by giving you unlimited free spins – until you lose. Starting with 1 free spin, every winning combination delivers 1 more. When you do lose, you will also receive a multiplier of 2x, 3x or 20x on all winnings.

“Na-na–na-na-na-na” Bonus: Ty Webb (Chevy Chase) certainly had some unique stroke techniques, each accompanied by his famous “Na-na-na-na-na-na”. The reels set to spinning as Webb knocks one ball after another down onto the reels, each capable of becoming a wild before the reels stop.

“Improve Your Lie” Bonus: Last but not least, Judge Smails character bonus gives players 1 free spin, and if a Wild Gopher or Wilf Golf Ball appears on the reels, another free spin is awarded. No wild means no more free spins. But during this Caddyshack Slots bonus, Golf Balls can be knocked onto the reels at random, awarding more free spins and enhancing your chance of winning.