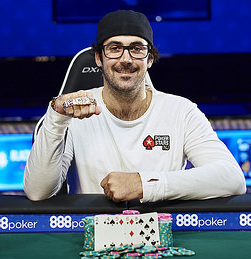 Jason Mercier became a recognizable face on the live poker circuit in 2008 when he emerged victorious in the EPT-4 Main Event Sanremo, collecting €869,000 (USD $1.3 million) in his first recorded live event cash. He snagged his first WSOP bracelet the following year, and has been chugging along ever since. Last night, Mercier collected his 4th bracelet, a $273k prize and even more than that on prop bets.

Traveling to Las Vegas from his hometown of Davie, Florida, the all-American poker pro joined a field of 100 entrants – up from 77 in 2015 – to compete in the $10,000 2-7 Draw Lowball Championship, otherwise known as 2016 WSOP Event #16. By the time it was over, the 29 year old had claimed the 39th spot on the short list of poker pros who’ve established themselves with 4+ WSOP bracelets.

Mercier faced a tough final table – and a tough field throughout, as only the most elite pros invest $10k into such a relatively difficult game as 2-7 Draw Lowball – watching the likes of 11x WSOP final tablist Stephen Chidwick and past WSOP bracelet winners Benny Glaser and David Grey, fall to the wayside.

The heads-up finish pitted Mercier against Mike Watson, who WSOP.com affectionally deemed one of the “best players without a WSOP win”. On the last hand, Mercier check-raised all-in with a 2-to-1 chip lead, getting the call from Watson after a full minute in the tank.

Watson collected an impressive $168,936 for the runner up finish in his 10th WSOP final table appearance. In fact, the only thing his career lacks is a WSOP bracelet, as he already has a WPT and EPT Championship Title under his belt.

When asked how this latest bracelet win stacks up to the rest, Jason Mercier said, “this was the second best of the four. The first one you get is always the most special,” he noted, “but I have been wanting to win this event for a long time and to get here against this kind of field was really nice.”

With a palpable air of mischief, he added, “It also helps that I had lots of side action riding on winning a bracelet this year.”

While a quarter million in the bank is an impressive payday, Jason told WSOP.com that he actually won more in prop bets he’d made with other poker pros prior to the start of the 2016 WSOP. He didn’t divulge exactly how much his prop bet for winning a bracelet this year earned him, but he did say “it’s more than the first place prize for this event.”

The now-4x bracelet winner added that he has more prop bets pending, relating to winning additional bracelets at this year’s World Series. A second WSOP bracelet would earn him “far more money in side bets” reported WSOP.com, and if Mercier’s good fortune brings him a third, “some poker players are going to be in for the sweat of their lives.”