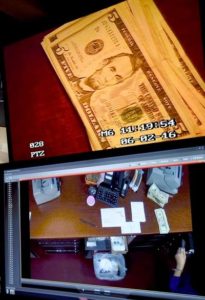 When I was 10 years old, I got my first pair of glasses. It was the most amazing thing, to be able to truly see – especially since I didn’t even realize I’d needed them for so long. I thought that’s how the world looked. I imagine that same feeling of amazement is overcoming the security staff at one PA casino as they received a major HD upgrade in their surveillance systems.

Members of the Pennsylvania Gaming Control Board (PGCB) were on hand at The Meadows Casino this week, where the security staff showed off the high-definition capabilities of its new surveillance system. The new cameras are so well honed that security can zoom in close enough to clearly read the complete serial number on a dollar bill.

Officials at Meadows Casino said this type of technology will greatly assist in the enhancement of gaming protection, not just by catching criminals and casino cheats, but by helping honest guests who may have accidentally left behind personal items.

Mere hours before Meadows Casino and the PGCB led local media on a tour of the facilities Thursday afternoon, one of the surveillance officers said a patron had left behind a purse atop one of the slot machines. Security immediately went back through the camera’s footage from earlier that morning and was able to distinctly identify the owner. She was instantly contacted, and the purse was returned safely.

The PA casino, located in North Strabane Township, has maintained a vast system of 1,200 security cameras throughout its 350,000 square-foot facility since it first opened in July 2009. Owners spent $2.8 million to upgrade the surveillance system, with 300 of its cameras – in the most crucial locations – now equipped with the latest high-definition technology.

“We’re the only [casino] in Southwestern Pennsylvania that has this capability,” said Sean Sullivan, General Manager of The Meadows. He said “our bloodhounds” – referring to the casino’s 25-member strong security team – monitor the system constantly, 24 hours a day, 365 days a year.

Those ‘bloodhounds’ are expertly trained by the PA casino’s Surveillance Supervisor, Tim Timko, who spent 25 years working security in Las Vegas. Timko personally trains each and every camera worker, teaching them how to professionally deal cards, and how to count cards at games like blackjack. Thus they aren’t just watching screens. They know exactly how to identify a cheater at the property’s 82 table games and 3,100+ slots.

“If you think you’re going to come in here and watch TV, you’re never going to catch anybody,” said Timko. “You have to want to learn.”

The cameras are also capable of facial recognition. This comes in handy in multiple circumstances, including the apprehension of players who may be using someone else’s ‘Players Club Card’, as well as players who are on the PCGB’s voluntary self-exclusion list.

David Harbach, a spokesman for the PGCB, said there are currently around 10,000 problem gamblers who’ve elected to place themselves on the self-exclusion list. Among them, about 2,200 have already been caught trying to gamble at PA casinos.