The global online gambling market is worth tens of billion of dollars annually. The wearable tech industry is all the rage. Thus it only makes sense that Smartwatch casino games, otherwise known as ‘swipeable’ slots, are finally getting the development attention they deserve.

Since the dawn of time, there’s been a huge market for gambling services. From bookmakers to casinos, operations have been booming for centuries. When the internet first came along, online gambling entrepreneurs were right there to capitalize on it. Likewise, when smartphones became popular, online gambling companies jumped on the opportunity to create mobile casino games.

Now the age of wearable tech has arrived, and 32Red Plc, a premier iGaming company based in Gibraltar since 2002, is spearheading a movement towards the future of Smartwatch casino games.

The first Smartwatches showed up on the market a few years ago, but they weren’t an instant hit, as some developers had hoped. They were expensive, offered minimal uses, and there simply weren’t enough available apps to attract the majority of consumers.

Data from tech researchers at Gartner show that approximately 6.8 million Smartwatches were sold in 2014. That’s not a lot compared to the number of smartphone owners around the globe, and even a competition-driven average price drop of 16% from $225 to $189 didn’t help. But that changed when Apple jumped aboard the Smartwatch bandwagon, heavily contributing to a sales boost of 30.3 million in 2015.

Gartner estimates that Smartwatch sales will increase further to 50.4 million this year, and as high as 66.7 million in 2017. A major catalyst for the wearable tech market is considerable improvements to the devices’ capabilities. 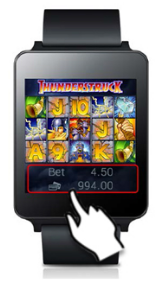 Smartwatches utilize a notably restricted amount of space, thus are largely confined to touch and swipe utilization. 32Red and its long-time games development partner, Microgaming, are capitalizing on those advancements by reinventing the site’s most popular slot machines, like Avalon, Dragon Dance and Thunderstruck, for optimization as Smartwatch casino games.

Vijay Prabhu of Techworm reported that, “32Red’s Avalon can be played by simply swiping your finger across the reels and pulling a little tab. This movement replicates the traditional point and click dynamic that you find in the online betting arena, and it also makes it possible for people to play other casino games via their smartwatch.”

He suggested that roulette would be another simple addition to the short-list of available Smartwatch casino games. Betting options could be easily controlled by simple touches, while a user could “set the wheel in motion with a simple swipe and pull technique.”

Other casino games, especially those with more intricate betting options and table diagrams – multi-player poker, for instance – would be less likely candidates for Smartwatch integration – at least, for now.

As always, technological advancements continue to progress at a rapid pace. Researchers at Carnegie Mellon University have already unveiled a prototype for a band that can be implanted under the skin of one’s arm, and paired with a Smartwatch. The user is then able to swipe positions on their arm, and the band responds by sending impulses to the Smartwatch.

Although still in the embryonic phase, such technology would allow Smartwatches to increase their capabilities by leaps and bounds, instead of limiting the user to touching or swiping a minuscule area of the watch’s screen. If and when this tech matures, virtually any gambling amusement would become viable for the future of Smartwatch casino games.