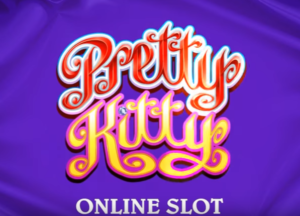 What’s the most popular thing on the internet today? Ask most people, and they’ll say it’s cats. Funny feline memes, often featuring the infamous ‘Grumpy Cat‘, and amusing cat videos are some of the most searched for items on the world wide web these days. Thus it’s no surprise the latest release from Microgaming is a cat-theme online and mobile slot.

The new reel spinner is called Pretty Kitty, and it combines furry felines with shiny gems. There’s no question these cats are living in the lap of luxury, donning blinged-out collars that mirror the exorbitance of a fine, multi-month-salary engagement ring.

Pretty Kitty offers some common features found in many of today’s online and mobile slots. Microgaming infused the new game with a 5×3 reel set and its popular 243 Ways to Win pay-line structure, but chose to leave out its typical Gamble feature. There’s no progressive jackpot in this one either, but it does carry a static jackpot prize of 140,000 credits.

As for pros and cons, I’m extremely pleased to see the design crew didn’t use any generic symbols in Pretty Kitty. However, if the elevator music played in the Pretty Kitty official promo video is any indication, the sound is likely to get toggled off by the majority of players.

The new slot is scheduled to hit Microgaming-powered online and mobile casinos in the first week of June, 2016.

The Pretty Kitty Logo is the Wild, and performs the typical task of any Wild in the base game. During free spins, it becomes a Stacked Wild anytime it appears on the reels. The Jeweled Collar is the Scatter, and awards free spins when 3 or more land anywhere on the screen. Free spins can be retriggered. 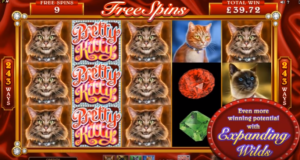 The game’s most unique feature is its ability to stack any of the 5 Cat symbols, which are the highest paying symbols in the online and mobile slot. Stacked Cats can happen in the base game and during free spins whenever the symbols line up correctly on the reels.

For this to happen, a cat symbol must appear on the first reel, and be involved in a winning combination with the same cat symbol appearing on another reel. The other cat symbol will also expand to cover its reels. It is possible for all 5 reels to expand with the same Cat symbol.

During free spins, if a wild symbol is also involved in that winning combination, the wild will expand to cover its reel as well.

For example, let’s say a Persian cat appears on Reel 1, followed by a Wild on reel 2 and another Persian on reel 3. The 1st and 3rd reels will both expand with all Persian cats, while the 2nd reel will stack with all Wilds. The payouts can be tremendous when this happens, awarding as high as 933x the bet.