Since opening in 2011, Nassau County’s Resorts World Casino has been generating millions upon millions of dollars for New York’s state education fund. Now, thanks to the 2016-17 State Budget plan approved last week, about $40 million that was previously slated for education will instead be siphoned back into the New York casino as a capital spending investment.

Needless to say, there are plenty of people who are incensed by the government’s plan to filter tens of millions of dollars away from education, and right back into the multi-billion dollar casino company, Genting New York, LLC, which owns and operates Resorts World Casino at Aqueduct Racetrack. Among them is Democratic Assemblyman Gary J. Pretlow of Mount Vernon, Chairman of the State Assembly Racing and Wagering Committee.

“That would be money that should be going to education and not to Genting, which is one of the richest companies in the world, a multi-billion dollar corporation,” Pretlow told POLITICO New York this week. “They don’t need to take money from children of New York to build a hotel or for any other reason.” 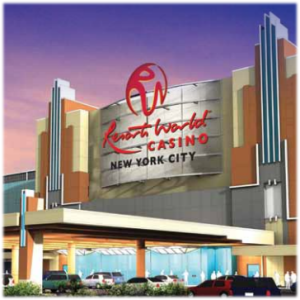 Michael Levoff, Senior VP for Genting, says Prelow has it all wrong. While the state’s education fund will fall short in the beginning, Levoff says the New York casino expansion will eventually return higher dividends for education as a result.

“Now that we are eligible to participate in the State’s capital allowance program, we will be able to embark upon a considerable expansion of our facility, which will be developed in consultation with our local community partners,” Levoff told POLITICO New York in an email.

“This investment will lead to increased visitation, more good-paying local jobs and a significant increase in overall revenue for New York’s education fund,” he said.

A source close to the company said Resorts World Casino is already planning to use the funds in its $300 million expansion project, which will add a hotel and additional meeting space to the facility.

According to the latest statistics from the NY Gaming Commission, Genting’s New York casino took in about $18 billion in wagers in the 2015-16 fiscal year (minus March), resulting in $727 million in gross gaming revenue after paying out winnings. About 44% of that – $337 million – was deposited into the state’s education fund.

So the county and casino get a ‘win’, but Goldfeder failed to mention any ‘winning’ elements for the children of New York. That argument was instead taken up by NY Budget Division spokesperson, Morris Peters.

“The reduction of the statutory aid-to-education percentage is more than made up for by the capital award allocation,” assured Peters in an email to POLITICO. “The goal is to increase education revenues — we wouldn’t make a change with an adverse impact.”

Assemblyman Pretlow’s opinion was not swayed, as he’s certain Genting could afford to pay for its own expansion project without siphoning money away from the state’s education fund. “We loved the small gains that we made in education,” said Pretlow, referring to the more than $1.1 billion the New York casino has contributed to the education fund since it opened in 2011.

“But then to turn around and to give away $35 million every year forever out of the education fund is I think a travesty and a miscarriage and we really have to address that and take it away,” he said.