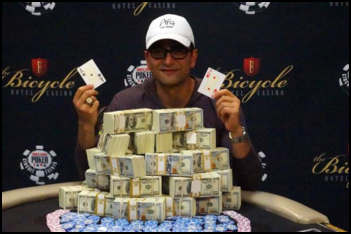 A few years ago, Antonio Esfandiari – aka The Magician – was one of the most feared professional poker players in the world. While his presence still yields the warry attention of his peers, the fact that he hadn’t won a 1st place prize in a major poker event since 2012 was a source of notable relaxation for his opponents. But his WSOPC victory at the Bike earlier this week proved Esfandiari is still on his game.

The 2015-16 World Series of Poker Circuit (WSOPC) has been traveling across America , and occasionally beyond, since August of last year. On March 19, the poker festival made its landing in Los Angeles, California, where The Bicycle Casino played host to 12 days’ worth of live poker action. The Bike’s $1,675 WSOPC Main Event kicked off Saturday, March 26, attracting a field of 756 to the tables.

The Magician is often known for his whimsical antics on the felt – everything from impromptu exercising to conspicuously adjusting his manhood beneath the table. But by the time the final nine convened on Sunday, Antonio was the perfect picture of a calm and collected poker pro, his demeanor as serious as it’s ever been. It was obvious he wanted this win, and nothing was going to stop him from taking it – not even 2006 WSOP Champion Jamie Gold.

Esfandiari would have a few other notable competitors to deal with before claiming his first WSOPC Gold Ring, as well. British poker pro Ludovic Geilich – the only non-American at the final table that day – was coming off $150k victory at the Wynn Poker Classic a few days prior, while Bryn Kenney, owner of New York Rounders, was still beaming from a $422k routing at the $25k Aria High Roller on March 5.

But alas, Antonio’s precision gameplay would outlast them all. Geilich fell in 8th place, collecting $26,980, and not too long after, Kenney faltered in 6th for $44,395. Two eliminations later, Esfandiari would face off with Gold in a heads-up showdown that was barely a challenge for one of the poker world’s highest ranking all-time money winners.

As the one-on-one battle began, Esfandiari was already entertaining an 11-to-1 chip advantage over Gold. Suffice to say, it didn’t take long for him to rake in the leftovers, his first WSOPC Gold Ring and the $226,785 1st place prize that came along with it.