According to The Australian, government officials have a scathing plan to put a stop to unlicensed internet gambling in the country. The media outlet reported yesterday that overseas online bookmakers will be banned from accepting Australian punters, at least until the next federal elections, pending “sweeping reforms”.

The government’s efforts are said to be geared towards regulating the $3 billion sports betting industry, putting a decisive end to bookmakers’ ability to extend credit to online punters; a promotional tactic that’s been heavily criticized by officials and problem gambling organizations for some time now.

The report also indicated that online in-play betting of any kind will be prohibited for the “short term”. That should mean that overseas operators with a license to accept Australian sports bettors – namely Bet365, Ladbrokes and William Hill – will be forced to rescind their mobile in-play betting apps, with which they’ve attempted to circumvent the law by providing in-play betting via smartphone apps. 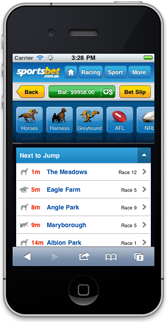 It was noted, however, that the government hasn’t decided which side of the fence to stand on in terms of online in-play betting. The Australian reported that the government will decide whether to permanently ban such interactive wagers or legalize the activity once upcoming federal elections are held, and measures to protect consumers by blocking unlicensed offshore gaming sites are in the books.

Australia’s longstanding gambling giants, Tabcorp and Tatts, as well as pubs and clubs that provide pokies to the gambling public, are sure to benefit from the temporary ban. They, along with the racing industry – which fears such convenient sports betting options would steer punters away from pari-mutuels – are hopeful that the government will choose to implement a permanent prohibition against the online ambling activity.

And while licensed sportsbooks are sure to see a dip in profits, they can at least keep their fingers crossed that the Australian government will lift the ban on mobile in-play sports betting with possible liberalisation efforts, depending on the results of the impending elections.

Current laws state that punters may only place in-play wagers on contests by physically entering a licensed, land-based retail shop, or over the phone.

When the Interactive Gambling Act of 2001 was structure, bets placed over the phone were clearly intended to mean picking up a phone, dialing a number and having a one-on-one conversation with a representative of the bookmaker. In today’s modern technological age, however, where the majority of people own a smartphone, mobile betting apps are able to closely mimic this process without actually requiring a conversation with a live representative.

The Australian reported that MPs were informed on Wednesday, “the government would take a three-stage approach, starting with consumer protection then tackling offshore bookmakers and lastly forming a position on whether in-play betting on sports should be legalised in the longer term.”

The media outlet understood the second stage of that plan to mean that the Interactive Gambling Act of 2001 would be amended to clarify that foreign operators who accept bets from Australians are breaking the law.

Additional powers to enforce the amended gambling law would be provided to the Australian Media and Communications Authority (AMCA), although the government organization’s jurisdictional rights to prosecute foreign operators are still questionable.