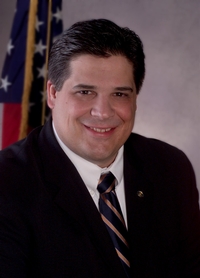 A Pennsylvania courtroom played host to State Representative Marc J. Gergely on Thursday, where the 47 year old politician was charged with breaking the very laws his appointed position directs him to construct. Gergely stands accused of conspiring with an illegal gambling racket based out of Pittsburgh. Yesterday morning, he pled not guilty to all counts.

Rep. Gergely is just one of more than a dozen people charged in the case. He faces three felony counts, and three misdemeanor counts, including dealing in and profiting from the proceeds of illegal gambling activities.

Last year, a man by the name of Ronald “Porky” Melocchi was sentenced to 10 years’ probation for running an illicit slot machine ring. State prosecutors now allege that Rep. Gergely, who’s been under investigation for the last few years, lent his political influence to Mr. Melocchi to help persuade business owners to install his slots on their properties, knowing full well they were illegal.

Court documents accuse Gergely of telling one local restaurant owner that he should install the gambling devices, advising him that, as a legislator, he had connections to local law enforcement that could ensure his business wouldn’t get in any “trouble”.

Gergely is also accused of accepting what amounts to bribe money during his political campaign. Prosecutors say he received a $2,000 campaign donation from Mr. Melocchi, and that the legislator took creative measures in documenting his accounts in an attempt to conceal the source of that money.

Mark Serge, Senior Deputy for the PA Attorney General’s office, commented on the treacherous nature of the case. “The allegations show what I would consider the insidious nature of organized crime. You have relationship and money that tends to infiltrate the political system and individuals get caught up in that,” Serge said.

“This is an ongoing criminal investigation,” he continued, adding that, “we do anticipate more charges in this matter.” Serge went so far as to allude to upcoming charges against other individuals “involved in the political system” that may have “had any kind of relationships with Mr. Melocchi and his organization.”

During yesterday’s proceedings, the court heard tale of a phony letter that was delivered to Rep. Gergely’s office in November 2012 by prosecutors. The letter was supposedly from the wife of a gambling addict who had lost their entire life saving playing Melocchi’s illegal gambling devices.

An excerpt from the letter read in court said:

“Mr. Gergely, I believe you’re the only person I can trust. I don’t know if I should call the FBI or State Police.”

With wiretap already in place by authorities, Gergely effectively incriminated himself by calling up Melocchi that night and telling him about the letter. He advised Melocchi to find out who this gambling addict was and take care of the problem.

“I just want to take care of you. She obviously has no idea that we have a connection. You know what I mean?”

In his defense, Gergely says his association with Ronald “Porky” Melocchi is based solely upon the man’s long-time friendship with his father. He insisted that their relationship goes no further.

As a result of the illegal gambling charges, Marc Gergely, who has served on the Pennsylvania House of Representatives since 2003, was forced to surrender his position as the ranking Democratic member of the House Labor and Industry Committee. However, as provided by law, he is not required to resign from the State Legislature.