Sports betting scandals are nothing new in the world of professional athletics. The most famous occurred in 1989 when former baseball player/manager Pete Rose admitted to betting on his own team. Betting of any kind on the same sport for which one professionally paricipates is strictly prohibited, but that didn’t stop Western Australia cricketer Peipa Cleary or the Perth Scorchers from doing it, either.

19 year old Cleary was accused of placing bets on the Test match between Australia and New Zealand back in November 2015. This week, Cricket Australia (CA) handed down a severe penalty that they feel is in no way extreme, considering the nature of her transgressions and her vocation.

Cleary admitted to betting on cricket, placing six bets that totaled just $15.50. As low as that amount may seem, especially when spread across six total wagers, the amount of money involved is not the issue, said CA. The fact that she breached strict sports integrity laws, having undergone specific no-gambling guidance as per her training as a professional cricketer, was enough to throw the proverbial book at her. 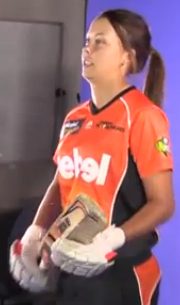 “CA has imposed a 24-month period of ineligibility on Cleary of which 18 months are suspended on condition that she commits no further offences under the (Anti-Corruption) Code,” read a statement from Cricket Australia. “She is also required to participate in anti-corruption player education programs delivered by CA in future.”

The first 6 months of Cleary’s penalty encompass an all-out ban, during which time the cricketer is prohibited from participating in all domestic and international cricket competitions, functions and related events.

The Australian cricketer’s punishment follows the recent 24-month suspension of Angela Reakes, a Sydney-based female cricketer who received a similar punishment in December for betting on the World Cup finals in March. In Reakes case, a series of 5 bets valued at just $9 was responsible.

CA defended its issuance of such harsh consequences, saying there were “aggravating factors” in the case against Peipa Cleary. The most provoking circumstance was the fact that the young athlete had just received face-to-face training against corruption, specifically detailing the prohibition of betting on cricket, two months prior to committing the indiscretion.

“Bets totaling $15.50 might seem small,” said Iain Roy, head of the Cricket Australia Integrity Unit, “but it doesn’t matter. We take a zero tolerance approach to any form of gambling on cricket by players,” he confirmed.

When a cricketer bets on cricket matches they are not involved in, the outcome of the contest may not affected. However – much like marijuana is labeled a ‘gateway drug’ – betting on other matches sets a dangerous precedent that can lead to a much worse scenario in which players may turn to betting on their own team’s performance.

In the case of Pete Rose, he eventually admitted to betting on his own team during his tenure as manager of the Cincinnati Reds (1984-1989), but never acknowledged betting against them. However, it is widely believed – especially by John M. Dowd, the lawyer who investigated the case – that due to a gambling addiction that developed over his years with the MLB, Rose probably resorted to betting on the Reds’ opponents at some point.

Hal McCoy, a Hall of Fame sports writer for the Cincinnati Reds since 1972, perhaps said it best when he penned the following statement. “The major problem with Rose betting on baseball, particularly the Reds, is that as manager he could control games, make decisions that could enhance his chances of winning his bets, thus jeopardizing the integrity of the game.”