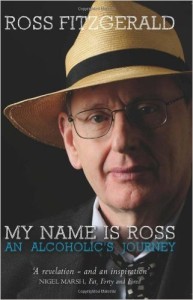 Researchers have discovered that approximately 20% of all adults who consume alcohol in Australia can be categorized as alcoholics. That detection has lead critics to chastise the alcohol industry for being dependent on alcoholism, immediately garnering a comparison to the casino and sports betting industries’ reliance on gambling addiction.
Tim Palmer of ABC News sat down with academic Professor Ross Fitzgerald, author of ‘My Name is Ross’, the story of his own battle with alcoholism, to discuss the issue.

“It shows that the alcohol industry is economically dependent on Australia’s heavy drinkers – especially when 20 per cent of our drinkers consume three-quarters of all the alcohol sold in Australia,” suggested Professor Fitzgerald.

He said those 5% are what the “liquor industry calls super-consumers”, calling their dependency on such alcoholics the “dirty secret that many of us have known for a long, long time.” He compared that awareness to the tobacco industry’s knowledge that “it was selling a highly addictive substance”.

That conjecture inevitably led to a more clear-cut comparison between alcoholism and gambling addiction. “The gambling industry makes most of its profit from about 20 per cent of its customers,” said Fitzgerald, noting that “those [are the] customers who are addicted to gambling.”

The encompassing topic of their conversation related to alcohol commercials that always encourage consumers to “drink responsibly”, just as gambling addiction is discouraged by ads that request punters “gamble responsibly”.

The professor said such tactics are merely a cover, because 80% of their customers already drink responsibly, and if the other 20% were to heed that advice, “It’d be catastrophic for the alcohol industry’s finances…

“That’s the real dirty secret,” explained Fitzgerald. “That the alcohol industry knows that they are economically absolutely dependent on this 20 per cent.” That the exact same result would ensue if gambling addiction could be prevented by a simple message urging people to “gamble responsibly”.

Where Do We Draw the Line?

Can’t the same be said of every customer-based industry? Would designer clothing stores like David Jones and Myer thrive if some of their more affluent clientele didn’t fulfill their insatiable urge to acquire matching shoes and accessories for every outfit the purchase? Would sports cards and comic book publishers survive if avid collectors didn’t faithfully attempt to procure every desirable card and comic released?

It’s a highly debatable argument, indeed. I’ve personally known shopaholics who would disregard their monthly bills to purchase a dress they just couldn’t live without, as well as collectors who’ve dropped more than a month’s pay on a single collectible action figure.

But the fact remains, alcoholism and gambling addiction are considered far worse damaging to individuals and their families, proven to perpetuating crime and domestic violence more so than any other form of compulsion.

As Professor Fitzgerald pointed out, the result of alcoholism is “between 5,000 and 6,000 deaths each year,” and “that alcohol directly results in well over 150,000 hospitalisations each year.”