If you’re old enough to take a spin on the pokies, chances are extremely high that you’ve seen the film Ted. Yes, that loveable—yet despicable—little teddy bear who stole our hearts alongside Mark Wahlberg as the most reprehensible, loud-mouthed, crude plush toy the comedic world has ever known, has been immortalized in his very own poker machine! 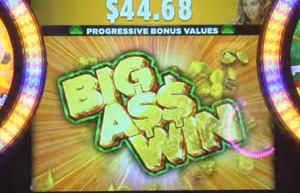 That’s right; Australia-based Aristocrat Leisure has turned that shamefully adorable bear – responsible for the highest grossing original comedy film of all time – into a 5-reel form of potently profitable entertainment.

The new Ted Slot finally arrived at casinos across North America in the first week of 2016. Aristocrat designed the poker machine to meet the preferences of slots lovers across the US and Canada, confirming that the “volatility is low, and the feature frequency is high”.

The Ted Slot was developed as part of the company’s expansive Wonder Wheels slot machine platform, ensuring a wide range of jackpots and bonus features that can be triggered. Aristocrat’s Wonder Wheels slots are encased in a massive, cabinet that spans up to 3.2 meters (10.5 feet), with a crystalline 140cm (55in) HD display monitor surrounded by a triad of wheels – each depicting the myriad bonuses available. 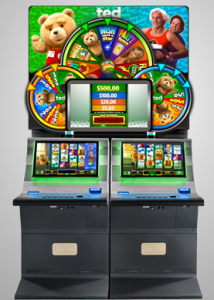 The new Ted Slot also features a half dozen bonus rounds that can be triggered at random. Aristocrat said the bonuses can be activated “at any time, with any bet”, whether the activating spin results in a win or loss. And with the low volatility and frequent feature hit rate of the poker machine, that equates to an exceptionally high level of entertainment value.

One of the pokies most endearing qualities comes from the Thunder Buddies feature, which can unlock one of 9 special bonuses, all based on actual footage from the 2012 Universal Studios motion picture. Quotes and cinematics abound with just enough of Ted’s indubitable bawdiness to match the film’s famously coarse humor.

Ted’s furry visage is displayed to the left of the reels, doing all sorts of humorous and oft-times raunchy things, like humping the reel set as it spins, throwing beer bottles and bellowing curse words at the players.

The 5 reel, 40 payline poker machines comes with a minimum 60 credit bet, requiring the activation of all paylines plus a 20-credit bonus bet. The maximum wager is fixed at 300 credits in the MSP format, while the SSP configuration allows for up to 600 max credits.

In an interview with J Todd of TWiG (see video above), Aristocrat’s Senior VP of Global Gaming Operations Matt Wilson said that, being the “the number R-rated movie of all time”, Ted has a “huge audience fan base.” He described the new poker machine as, “the type of product that’s very funny, and you can also win money”, noting the impromptu rhyme of his statement.

Ted’s crude and raunchy behavior is not what most players expect to experience when playing the pokies, and while it may not appeal to everyone, those who loved the film are sure to enjoy the unique hilarity of Aristocrat’s new Ted Slot.