Every month, we look forward to the upcoming release of new online slots from Microgaming. As the world’s leading developer of interactive online gambling software, Microgaming churns out a collection of new game titles each and every month, and we have high hopes for the company’s first release of the New Year.

Microgaming uploaded the Lucky Twins Promo Video back in September of 2015, giving us a glimpse into what the future will hold in 2016, and while I can’t say I’m too thrilled about yet another 5-reel, 9-line cookie-cutter design, I do think the developers went in the right direction with the new online slots’ theme.

Lucky Twins is based entirely on the concept of luck. It’s a suitable motif, considering the same idea is the basis of playing the slot machines. Many gamblers prefer casino amusements like blackjack, where an inkling of strategy can go a long way in swelling your bankroll. For slots fans, who make up the majority of gambling enthusiasts around the world, luck is the dominant factor.

Scripting the slogan “Good fortune comes in pairs”, Microgaming’s graphic department developed a pair of cute little Oriental twins – who don’t appear to be nearly old enough to gamble, themselves – as the main characters of the new online slots. The rest of the symbols revolve around good luck charms, mostly associated with Asian folklore. 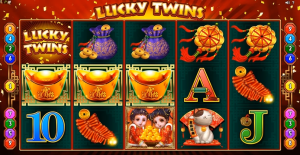 There’s a heavy infusion of red, gold and green colors, which traditionally represent good luck, wealth and harmony. The Meneki-Neko, symbolized by the figure of a waving cat, is a common talisman of fortune in Japanese culture. Golden dragons are also present, which carry several symbolic meanings in Oriental customs, including wisdom, courage and – of course – wealth. Likewise, the tasseled coin pouch denotes endless wealth. Red firecrackers signify good luck in warding off evil spirits. You can see where this is going…

As has become all too common with online slots from Microgaming, the design team didn’t put nearly enough creative effort into the imagery, using the generic playing card symbols of 10, J, Q, K and A to round out the reels’ graphics. 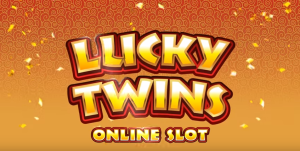 The new online slots carry the same basic features of most 5-reel spinners. The Lucky Twins logo is the Wild, paying the highest base-game payout of up to 10,000. The vibrant gold Scatter symbol, etched with Chinese lettering, delivers 10+ free spins whenever 3 or more appear anywhere on the reels in a single spin.

Like one of Microgaming’s most popular new online slots of 2015, Basketball Star, the company chose to infuse Lucky Twins with ‘unlockable achievements’. It’s not yet know what dedicated players will have access to, since the game hasn’t officially launched yet, but we do know from the teaser—and past experience with this type of slot machine—that players are able to unlock things like free spins and higher max jackpots, up from 10k to 25k just for landing a pair of Meneko-Neko on an active payline.