As every year approaches its inexorable end, we look forward to the festivities of the holiday season. Online pokies developers do, too, often launching at least one new Christmas themed poker machine. We’ve already seen quite a few new seasonal additions in 2015, but the new Xmas Joker is unlike any of them.

Play’N Go released Xmas Joker at the end of November, 2015. It’s brimming with cheer and overflowing with the vibrant red and green colors of the season. Its creators were so immersed in the details of the game’s aesthetics they even trimmed each and every reel in swirling candy canes!

But alas, following closely to the Christmas theme isn’t what sets Xmas Joker apart from all the other new holiday pokies that hit the world wide web this year. Unlike all of the others, which are classified as ‘video slots’ with 5 reels and more paylines than you can count without your eyes crossing, Play’N Go developed something more modest and uncomplicated.

A classic 3 reel, 5 payline pokie, Xmas Joker was designed to appeal to niche gamers who prefer to know exactly what they’re getting with each spin. Where video slots often entail page after page of complex game rules and pays, this new game’s paytable is only a single page long and incredibly easy to memorize. But don’t worry, that doesn’t mean you won’t find features worth appreciating, like free spins and scatter bonuses.

Perhaps I’m over dramatizing the simplicity of the game, but having played so many pretentious 5-reel titles over the years, I found the new pokie, Xmas Joker, to be quite refreshing (and undeniably festive), and I know some of you will agree. So with no further ado, let’s take a closer look at Play’N Go’s new holiday poker machine. 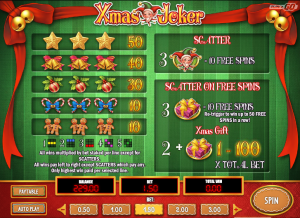 Xmas Joker has 3 reels and 5 paylines, all of which are automatically activated so you don’t have to worry about missing out on any wins. Bets start as low at $0.50, scaling up to $100 per spin. As always, Auto Play is available.

Xmas Joker features just 6 symbols in the base game. There are Stars to top the tree, golden Bells swathed in red ribbon, Ornaments crowned with holly, interlacing Candy Canes neatly decorated with blue bows, festive Gingerbread men, and the Xmas Joker himself, who serves as the Scatter in the base game.

You’ll need to line up three alike symbols on a single payline to get a payout, with the Star being worth the highest amount of 50 credits. However, the main goal for players is to see 3 Xmas Joker’s appear anywhere on the reels. This initiates 10 free spins, and throws an extra symbol into the mix.

During free spins, the Xmas Joker symbol is replaced with a Gift symbol as the new Scatter. When at least 2 Gifts show up on the reels, players win anywhere from 1x to 100x their total bet. And if 3 or more appear, a whole new set of 10 free spins are also tacked on to the remaining free spins. Players can retrigger as many as 50 free spins in a row.

That’s about it. As I said, Xmas Joker is as uncomplicated as it gets, but just as rewarding as the average video slots that most players and developers are so keen on. If you want to give the new online pokie a whirl, you shouldn’t have a hard time finding it since Play’N Go software is supported by over 200 online casinos, including two of my favorites, Guts Casino and LeoVegas.