The gambling landscape at Macau casinos is vastly different from that found in Australia or the United States. Despite being one of the largest gambling meccas in the world per capita, there is an incredibly low ratio of slot machines to table games. According to one industry exec, that could change in the foreseeable future.

Ken Jolly is the Vice President for the Asian division of games manufacturer Scientific Games. In a recent interview with GGRAsia during the 2015 Macao Gaming Show (Nov 17-19), he explained why players of Macau casinos are so attracted to table games, and how he expects that attraction to pour over into the slot machine genre soon enough.

“We do believe that as the mass market continues to develop, and certainly [with] the pushing of that area, there is more opportunity for slot machines [and] electronic table games with both live dealer and non-live dealer,” said Mr. Jolly. 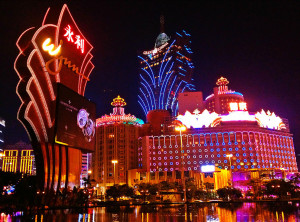 No one expects such changes to come overnight, of course. Mr. Jolly said that Macau casinos are still reliant more upon table game revenue, and will be for some time, but that the transition to a more slots-driven clientele is on the horizon.

“We do see that [the slot segment] of the market will grow,” he told GGRAsia, “but predominantly [Macau] is still a major table market. There are some 15,000 to 16,000 machines in the market, including the multi-stations as well. When you look at the size of the [Macau gaming] market, that is not really a big number,” he explained.

The Scientific Games VP compared Macau casinos to the more mature gambling industries of the world. “Look at markets like Australia, with 200,000 machines, and North America, with 900,000 machines,” he said. Macau’s market will take years to reach a comparable status, but Mr. Jolly pointed out that “there is steady growth and there has been steady growth in the slot revenue numbers as well.”

In Macau’s first decade of casino gambling, beginning in 2004, slot machine revenue was on the rise with each passing year. However, in 2015, the region is expecting its first overall decline in market-wide slots revenue. From January to September 2015, slots have generated MOP8.8 billion (AUD $1.53 billion; USD $1.1 billion), down 22% from the same time frame last year.

Then again, the region’s entire gambling industry saw similar declines, with an overall year-on-year drop of 36% in revenue from slots and table games combined in the first 9 months of 2015. Industry analysts are blaming the Macau government for switching gears, hoping to bring in more tourists for non-gaming entertainment attractions. However, the second-phase opening of Cotai’s Galaxy Resorts could help turn things around.

Teaching Players to Love the Slots

As for attracting more slots players to Macau casinos, Mr. Jolly said it’s simply a matter of drawing their most common gamblers to the machines. The majority of their clientele come from China, where very few people are accustomed to these types of games. Instead, they flock to the table games they are more familiar with.

In Australia and the United States, the opposite is true. Despite most table games having a lower house edge, most Americans and Australians are deterred by their higher table limits. They would rather play slot machines, which offer much lower minimum bets and don’t require any real thought process or strategic gameplay.

Mr. Jolly said once the Chinese become more familiar with slots, their popularity should rise. The key, he said, is to “make sure their learning experience, or their initial experience, is a good one to get them back next time they visit Macau.”