Located in the heart of Cairns, Queensland, Gilligan’s is the premier backpackers resort in Australia. Known primarily for its nightlife entertainment and budget-minded accommodations, the popular destination has become shrouded by a legal dispute that alleges bullish intimidation tactics against one of its former restaurant venues, Mad Dogs.

The fiasco began in 2007 when the Mad Dogs catering company signed a three year contract to open an in-house eatery and pizza shop at Gilligan’s. According to court documents, the restaurant’s owner, Ben Le Van, accused the nightclub of running a “sustained campaign of intimidation” in an attempt to derail Mad Dogs and drive them out of the Grafton Street location.

That same year, Mr. Le Van filed suit against Gilligan’s and its director, Christian Ainsworth, son of tycoon slot maker Len Ainsworth. The owner of the restaurant, which has since gone out of business, is seeking over $500,000 in damages. 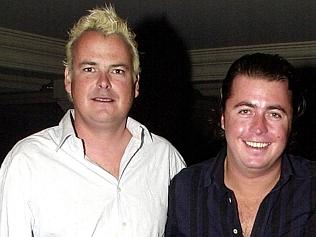 Apparently the two had a durable friendship prior to their business engagement, having met back in high school. This photograph shows Christian Ainsworth (left) and Ben Le Van (right) during better days, before their friendship went sour. According to Justice Jim Henry, that relationship “unraveled quite dramatically” shortly after entering into the business agreement.

Mr. Le Van alleged that Gilligan’s wanted Mad Dogs out, increasing his hostel rates and timing out renovations specifically aimed at deterring patrons from his restaurant. The judge referred to those claims as a “kamikaze theory”, dismissing them after taking a walk-through of the nightclub, but he agreed that management “acted very poorly” in their communications with Mr. Le Van.

At the trial, Mad Dogs’ owner testified that he was called to have a lunch meeting at the home of Mr. Ainsworth in Sydney. During that meeting, he said Gilligan’s general manager Colin Lewsey threatened him with physical and financial harm, saying that if Mad Dogs did not agree to terminate the contract, “we’ll have your legs broken” and “we’ll send you bankrupt”.

Justice Henry had no doubt that Mr. Lewsey was guilty of using intimidating tactics to drive the restaurant out, saying the club’s general manager “encouraged the concoction of false allegations against Mad Dogs”, going so far as to call upon a member of Gilligan’s staff to “throw a rat in there”. Doing so would make it appear that Mad Dogs had violated the terms of the agreement in regards to operating a clean kitchen.

“It can be seen Gilligan’s was continuing to try to intimidate Mad Dogs into relinquishing its rights under the agreement,” said the judge in his ruling against Gilligan’s nightclub.

After a grueling 8-year battle, Mr. Le Van finally won his claim against the backpacker’s hostel in Supreme Court last week. However, Justice Henry rejected the claim against the heir to the slot maker fortune, Christian Ainsworth.

He ruled that as de facto director, Mr. Ainsworth was an ancillary party in the matter and did not encourage the bullish activities, therefore could not be held responsible for any actions taken by those in charge of the hostel resort’s operations.

The court will decide how much to award Mr. Le Van when they reconvene on November 27. The amount will surely be ample considering Gilligan’s will be responsible for covering 8 years’ worth of court fees.