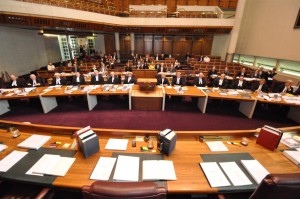 Australia’s largest gambling companies, Tatts and Tabcorp, returned to ACT today where the High Courts prepared to hear appeals of their cases against the Victorian government. The original cases were heard in 2014, where Tatts received a favorable ruling to its claim of $540 million in compensation, but Tabcorp’s $700 million claim was rejected. Both cases were appealed by the respective losers.

The compensation claims stem from pokies laws, and reform of those laws, dating as far back over 20 years.

In 1994, Victoria privatized the TAB, listing Tabcorp on the ASX for public trading. Both Tabcorp and Tatts were provided 18-year duopoly licences to operate all poker machines throughout Victoria, including those in the Melbourne Crown Casino, as well as those located in pubs and clubs.

In 2008, Victoria initiated pokies reform that stripped Tatts and Tabcorp of their duopoly, giving the owners of pubs and clubs the right to apply for licences to operate their own poker machines. That law did not go into effect until 2012, giving control of more than 27,500 pokies to their respective pub/club owners.

Although control of the poker machines was not handed over until August 2012, because the laws were altered four years prior, Tatts and Tabcorp sued the Victorian government for compensation of the money they pre-paid for the licensing of those machines.

The appeal hinges on the High Courts’ interpretation of the term “new licences” in Section 4.3.12(1) of the Gambling Regulation Act 2003, which reads:

The Victorian government claims those obligations were nullified when s 4.3.12 was repealed in 2008.

Tatts says the definition of that term has no bearing on the case because it was never issued a new gaming licence as per the restructuring of pokies laws. Victoria, on the other hand, says the new gaming licences that were issued to pubs and clubs were so drastically different from the ones issued two decades ago, that former agreements cannot be applied.