The online sports betting giant Paddy Power has pulled a lot of commercial stunts over the years, and while such racy ads do draw a lot of attention, it’s not always the good kind. The company’s controversial tactics, although steaming with hilarity, have been criticized for their often denigrating nature. But the operator’s latest ad campaign was deemed so inappropriate the Advertising Standards Authority for Ireland (ASAI) had it banned.

The ad campaign in question, which began circulating in July 2015, depicted a lorry with a series of well-known—and foreign-born—athletes; all recognized ambassadors of the Paddy Power sportsbook. Across the truck, in large print, read the words:

“Immigrants, Jump in the back! (But only if you’re good at sport)” 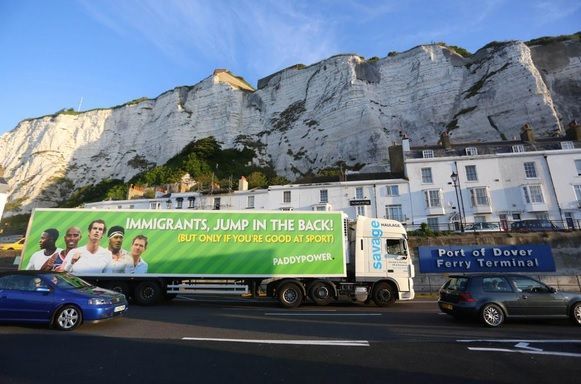 Immigrants, jump in the back! (But only if you’re good at sport) – photo courtesy The Drum

While the marketing scheme was obviously meant as a joke, and the majority of its audience were amused by its intent, not everyone found humor in it. Paddy Power was poking fun at the current high rate of illegal immigrants flooding into the United Kingdom by hopping aboard shipment trucks, as well as the nation’s reputation for lauding immigrants who happened to be athletically inclined.

In traditional fashion for the Dublin-based sportsbook, it wasn’t just a social media campaign, but one that actually sent the questionably rendered lorry traveling the countryside. With the recognizable visages of two Samoan-born athletes, marathoner Mo Farah and rugby player Manu Tuilagi, England cricketer Eoin Morgan from Ireland, footballer Raheem Sterling from Jamaica, and Andy Murray, a tennis star from Scotland, the massive big rig journeyed from Dover to the French Port, drawing plenty of attention along the way.

After receiving numerous complaints as to the offensive nature of Paddy Power’s controversial lorry, the ASAI initiated a ban against the ad campaign.

Paddy Power responded by pulling the marketing stunt, but defended its actions based on the company’s long history for running ads that are “edgy, humorous and engaging”. The online sports betting operator said the main funnel of distribution was social media, targeting those who were already fans of the sportsbook that would be sympathetic to the ad’s intended “mischief”.

The ASAI acquiesced to Paddy Power’s intentions, agreeing that the majority of its viewers would take nothing more than humor from the campaign, but said it “was nevertheless inappropriate for advertisers to refer to vulnerable groups, in a manner that highlighted their current high profile difficulties, in marketing communications merely to attract attention.”

Paddy Power issued a statement to The Drum, saying the advertisement was never meant “to cause offence or to be insulting to immigrants, rather we were simply referencing a long running joke regarding Andy Murray’s nationality and it was just that – a joke.” The sportsbook went on to apologize by saying, “We regret any offence that was taken by the complainants.”

Historically, the brand’s antics have been lauded by the community for being some of the most successful ad campaigns in the business world, like the time Paddy Power pretended to have cut an enormous message into the Amazon Rain Forest to wish good luck to the English during the World Cup in Brazil, or the time a wrong number resulted in a long-running, Twitter-fed text messaging foray between the Paddy Power PR guy and someone unlucky bloke named Steve.

To learn more, check out the Paddy Power’s Top 5 most Bizarre, Hilarious Stunts.