The dawn of a new month Down Under means more ways for Aussies to play their favorite Microgaming slots. The world leader in interactive gaming software has just released two new titles for the month of March, Lucky Leprechaun and Golden Princess. Both online pokies went live yesterday, and can now be found at hundreds of Microgaming powered online casinos. 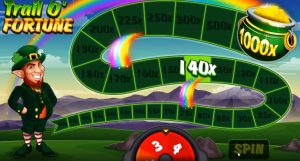 Just in time for St. Patrick’s Day, Microgaming slots developers invite players to “find your lucky fortune” with this new 5 reel, 20 payline poker machine. Lucky Leprechaun features two exciting bonus rounds, where up to 1000x multiplier can be achieved. In line with the Irish theme, the new slot’s symbols include the charming leprechaun, gold coins, pots of gold, pints of ale, smoking pipes, fiddles and the classic playing card icons, 10, J, Q, K and A.

The Lucky Leprechaun is the Wild and replaces any symbol necessary (except Scatters) to produce the highest possible winning combination. The Gold Coin is the Scatter, but it doesn’t work like traditional scatters. Landing a single Gold Coin on the 5th reel will activate free spins. During free spins, gold and green clovers can appear at random on the reels. Gold clovers grant additional multipliers, and green clovers deliver more free spins, while stacked wilds can rack up big wins.

The Microgaming slots most prominent feature is called Trail O’ Fortune Bonus, and is triggered by hitting three or more Pot of Gold bonus symbols anywhere on the reels. The screen changes to something that looks like a St. Paddy’s Day board game, wherein the player gets several spins on a wheel numbered 1-5, moving that many spaces along the board per spin. Each space on the board has a progressively higher multiplier that scales from 30x to 1000x. When it’s all over, the player’s triggering bet is multiplied by the number on their final landing space, and that becomes their winnings for the bonus round. 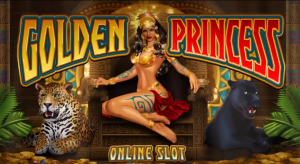 The Golden Princess “rules your quest for gold”, taking players back in time to the days when Aztecs ruled the jungles of South America. This 5 reel, 25 payline poker machine sends players on a grand adventure in search of endless wealth, depicting the lovely princess, her panther and leopard protectors, Aztec warriors and the traditional 10-A playing card symbols.

The Golden Princess logo is the Wild and awards 2x multipliers on all wining combinations they help to produce. Landing 5 Golden Princess Wilds on a single payline delivers the highest payout of 125,000 coins. The Treasure Chest is the Scatter, granting up to 30 free spins when 3+ appear anywhere on the reels. Stacked wilds can fall and Scatter symbols become multipliers of 2x, 3x, 5x and 10x when they land during free spins.

New Microgaming Slots vs Past Favs

All in all, these aren’t the best Microgaming slots to hit the market in recent years, but they definitely pack an entertaining punch. Neither Lucky Leprechaun or Golden Princess are particularly special in terms of eye-candy graphics or cinematics, but both carry an interesting theme and exceptional bonus features that can produce exorbitant payouts if you get lucky enough to trigger them.