Pokies pubs and clubs throughout Queensland have been ultimately successful over the years due to minimum competition among localities. That could change very soon if James Packer, owner of Crown Resorts, gets his way. Packer has proposed a plan to open a multi-billion dollar casino resort property that would likely necessitate a license to operate thousands more poker machines in central Brisbane.

Crown Resorts is the owner and operator of two of Australia’s largest gambling establishments, Crown Casino Melbourne and Crown Perth. Opening a new Brisbane casino on the riverfront would be an ideal investment for the company, but Packer is sure to face a great deal of opposition from pokies pubs and clubs, not to mention a rival bid from Echo Entertainment Group.

Crown’s leading competitor in Australia, Echo Entertainment also submitted a complete proposal to build a new Brisbane casino, retail and entertainment complex on the site in Queens Wharf. Both parties offered administrators stunningly artistic impressions of their intended architecture, along with complete development plans for their respective properties.  However, Queensland officials ordered both companies to cease publication of any further plans, thus our knowledge of the situation has been stunted.

What we do know is that both plans are comparatively similar in several ways. Each would be designed with upscale architecture, featuring 5-star accommodations, indulgent entertainment, high-end retail outlets, casino gambling and other affluent amenities. But there could be one very distinct difference between the two, and that’s the source of their impending poker machines. 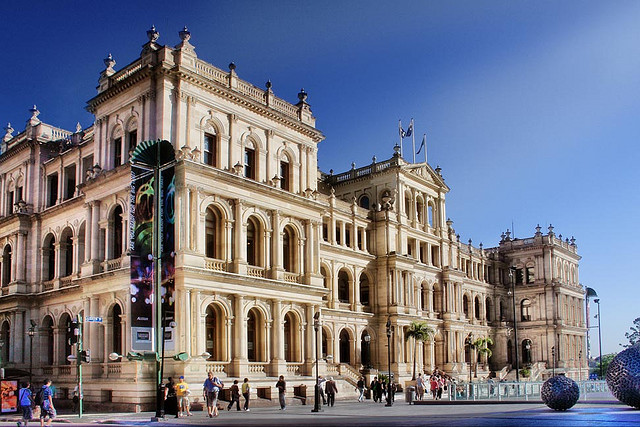 According to sources within the industry, Echo Entertainment has no plans to apply for additional pokies licenses to bring machines into the proposed establishment. The company already operates  Treasury Casino (pictured right), located adjacent to the proposed building site. Instead of seeking additional poker machines, Echo Entertainment would simply extract approximately 1,600 machines from their current Brisbane casino location and install them on the new property. The heritage-listed Treasury building would then be redeveloped into a high-end retail location.

In contrast, it’s expected that Crown Resorts would be applying for new poker machine licenses to install anywhere from 1,500 to 2,500 new pokies. Owners of pubs and clubs in the area are on high alert as the additional poker machines would increase competition, drawing from their current customer base.

Doug Flockhart is the Chief Executive of Clubs Queensland, which controls approximately half of the region’s near-50,000 poker machines. “I’m deeply concerned about the effect that an additional 2500 machines will have on the existing pubs and clubs in the rain shadow of that area.

“Let’s say Crown is successful,” hypothesized Flockhart, estimating 1,500 to 2,500 new pokies at the destined location. He said Crown will be “competing against Echo” and its current 1,600 machines at Treasury Casino. “You’re going to have two casinos in the same locality slugging it out for, in essence, the same business.”

Although pubs and clubs do not exist in central Brisbane, Flockhart says casinos of Crown Resorts’ magnitude could have a resounding impact on small scale venues, from the Broncos League Club some 4.7km to the northwest, to as far as pokies pubs and clubs on the Gold and Sunshine coasts. He called them “aggressive operators who are inevitably looking for a return on their investment. Everyone fighting for market share would see competition that south-east Queensland has never seen before.”