Microgaming is the world’s leading developer of online pokies and other interactive gambling amusements. Every month, we look forward to the release of multiple new titles, and the first of 2015 hit the casino platform on January 7, called Gung Pow. Based on the Chinese New Year, the online poker machine has plenty of perks for Australian gamers.

The software developer released this new title well ahead of time, with the Chinese New Year set to take place next month on February 19, 2015. It’s not certain where Microgaming came up with the name for the online poker machine, but for fans of martial arts comedies, the hilarious 2002 film Kung Pow: Enter the Fist! comes to mind. 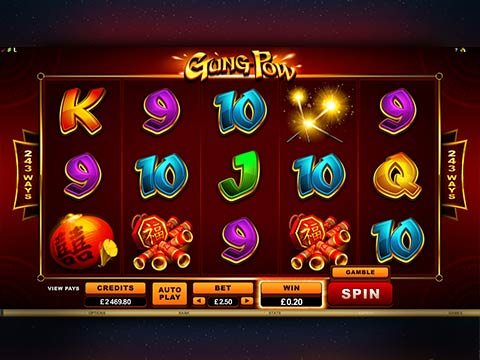 Gung Pow is a 5 reel slot machine that features Microgaming’s famous 243 Ways to Win pay table and a 90,000 coin max jackpot. The color red is considered lucky in Chinese culture, therefore it dominates the online pokies backdrop in a darkened hue that is easy on the eyes. The symbols fall in line with the Chinese New Year theme, depicting fireworks, fire crackers, sparklers, Japanese lanterns, gold coins and the standard playing card symbols of 9, 10, J, Q, K and A.

The square-ish Gung Pow icon is the Wild and represents any other symbol necessary to complete the highest winning combination, except for Scatters, of course. The Scatter is the Gold Coin symbol. When three or more Scatters appear anywhere on the reels, fireworks go off across the screen to celebrate the triggering of 15 free spins with a 3x multiplier for all ensuing payouts.

The new online pokies title offers no special bonus games or progressive jackpot, but the frequent fireworks displays and potential for up to 90,000 coins in a single payout delivers the traditional excitement Microgaming’s virtual poker machines have become known for.

Where to Play – Spin Palace

Although it’s only been on the market for two days, online pokies fans can find Gung Pow at a wide range of Microgaming powered online casinos, including one of my personal favorites, Spin Palace. Established all the way back in 2001, Spin Palace is the flagship of The Palace Group of internet casinos, and carries with it a long-standing reputation for superior service and integrity. They also happen to feature a lucrative sign-on bonus for Australian online pokies players.

New members of Spin Palace are privy to a $1,000 deposit bonus over the first three purchases. On the first deposit, players can snag a 100% up to $250 casino bonus, every cent of which can be used to play Gung Pow or any other poker machine on the website’s slots menu. Making a second deposit garners only a match of 25%, but it is worth up to $300. On the third deposit, players can grab the highest deposit bonus of $450, matched at 50%.

With Microgaming at the helm, members of Spin Palace also have the assurance of knowing the software is regularly tested for fairness, and all payout percentages are posted directly on the pokies site every month. The latest audit reveals a payout percentage of 96.59% across the full line-up of online poker machines, which is well above the standard pokies payouts set by Australia territories for land-based operators, averaging just 87%.