Many are the pokies fans who’ve described the feeling of winning a huge jackpot as a brief, enervating shock to the system. Such instances may lead to fainting, the skipping of heart beats and/or the inducement of unbridled screaming. These are all generally associated with moments of immense joy in a casino setting. However, as was discovered by the sizable crowd that inhabited the SkyCity Casino in Darwin last week, those exact same reactions can be produced – minus the element of joy – by the unexpected presence of a lethal sea serpent in the midst of the poker machines. 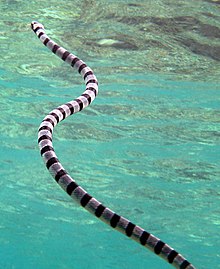 On the evening of Sunday, October 19th, not long after the clock struck midnight, guests of the Arafura seaside casino were greeted by a most unwelcome visitor. A lethally venomous yellow-lipped sea krait (Laticauda colubrine), measuring a lengthy 1.3 meters in size, slithered its way onto the gaming floor. Pictured left, the sea snake is recognized by its unmistakable black and grey stripes, with a slightly yellowish jawline. They are also known to inject up to 12x the amount of venom necessary to kill the average size human being. Fortunately, they are also considered an equable species that rarely become aggressive towards humans without distinct provocation.

The entrance of the sea snake came as a huge shock to patrons of the pokies, but the calm and collected nature of the casino staff, who reacted quickly to what could have been a very deadly situation, helped to ease the situation. One member of the staff immediately got on the phone with Phil Mangion, a local snake catcher with Parks and Wildlife, while another member of security managed to wrangle the venomous serpent partially into a lunch bag just before Mangion and his crew arrived on the scene.

Mick Guinea, a local environmental scientist, called the event “thrilling”. He explained that this particular class of sea snake is native to the waters of Japan, Papua New Guinea, Samoa and South India, and believes that it was migrating from the islands of northern Indonesia before haphazardly slithering into the pokies den. “It’s always exciting when animals cross into uncharted territories,” Guinea added. “There is no breeding population for these snakes in Australia. It’s very likely they could be naturally migrating.”

The environmentalist went on to explicate the nature of the yellow-lipped sea krait, saying that they are the only species of sea snake known to lay their eggs on land and that the vast majority of their diet is eels. “She had the potential to breed a colony,” said Guinea. “It’s almost breeding season, and she was in great shape with a layer of fat and all of the conditions to have been carrying fertilized eggs.”

Once the ordeal was over, the deadly snake was released at the East Point Recreation Reserve, located just off the coast of the Arafura Sea in Darwin, into a coppice of Mangrove trees. Neither the snake, nor any of the casino’s pokies-loving patrons were harmed during the experience, although it’s almost certain that none who witnessed the incident – including the serpent – will forget the resultant shock anytime soon.